Priorat is a county of Catalonia best known for enotourism, the growing and production of high quality wines that carry the domination of origin ‘’DOQ Priorat’’, which had first started by Carthusian Monks in the 12th century. Priorat is bordered by the river of Ebro and is found in one of the southern parts of Catalonia. Its climate is very much influenced by the volcanic soils, the mountains, and the Montsant natural park that are surrounding the area.

These factors result in some of the best wines in Europe. The two typical varieties are the grapes Garnacha and Cariñena. Wine lovers that would like to do enotourism in the area will have numerous local wineries to choose from, specialising in guided visits in which guests are able to learn more about the local production and taste excellent wines, famous all over Spain and in internationally. At the same time smaller villages of Priorat still carry their very original character and will give you more information on historical parts that influenced the region, such as the wars between moors and christians and, more recently, the Spanish Civil War. 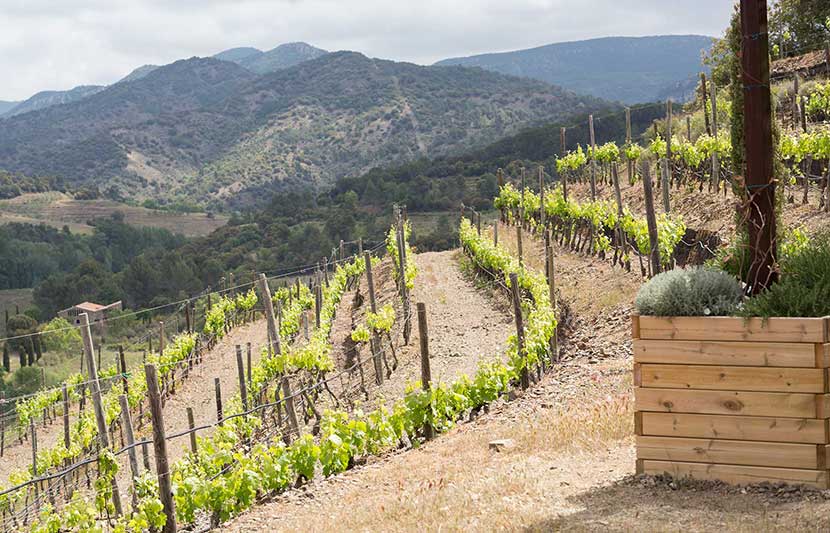 → Read more about our Wine Tours to Priorat

Montserrat in English means literally ‘’serrated mountain’’ and it takes its name from the impressive shape and rock formations that its peaks have. As it is commonly said, the mountain peaks are not the only things to impress you, as the views over the Catalonian countryside from the altitude of even 1.236 m, will take your breath away and full you with adrenaline.

Montserrat mountain is considered as a spiritual place both for locals and visitors, but each guest can choose according to their interests what they would like to see, with the main attraction being the 16th century Basilica of Montserrat, with the famous Virgin of Montserrat ‘’La Moreneta’’, known to accomplish miracles. Visitors might also have the chance to listen to the famous young boys ‘choir, ´´L’escolania’’, make a visit to other cultural attractions of the mountain and of course hike, cycle or climb in the beautiful and extraordinary nature that is found in Montserrat. 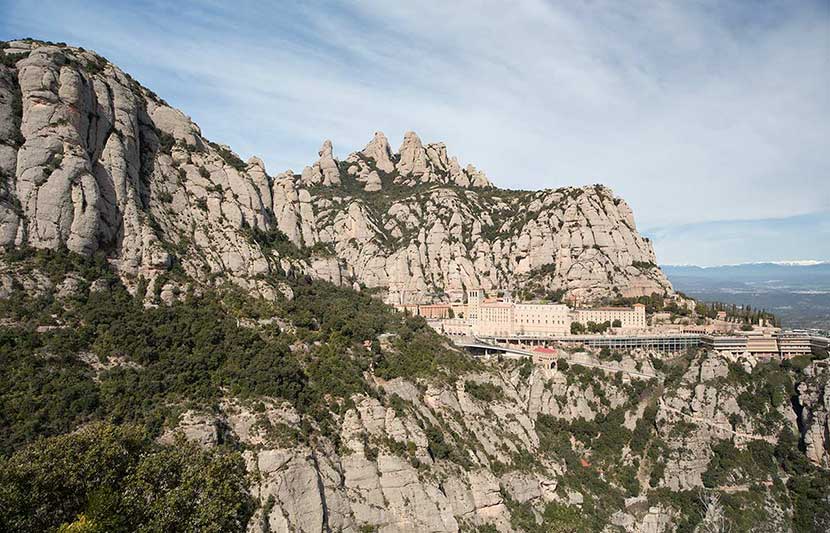 → Read more about our Tour to Montserrat & Cava

Sitges is a very much visited and loved destination about 35 km southwest of Barcelona. Most visitors have heard about the city for its Carnival and the Film Festival that take place each year. Without any doubt this small city is also known for its tourism that is attracted thanks to its ability to combine beautiful sea coast and the natural landscapes from the neighbouring Garraf. The city has been famous in the past for Spain´s counterculture during the 1960´s while its artistic reputation grew during the 19th century with the Catalan artist Santiago Rusiñol residing in the city during the summers.

Sitges hosts a big international community that lives there permanently. Admiring the church of San Bartolomé and Santa Tecla built in the seventeenth century, will be inevitable as its asymmetrical silhouette that is located on a hill above the beach, is one of the most characteristic and beautiful images of sunny Sitges. 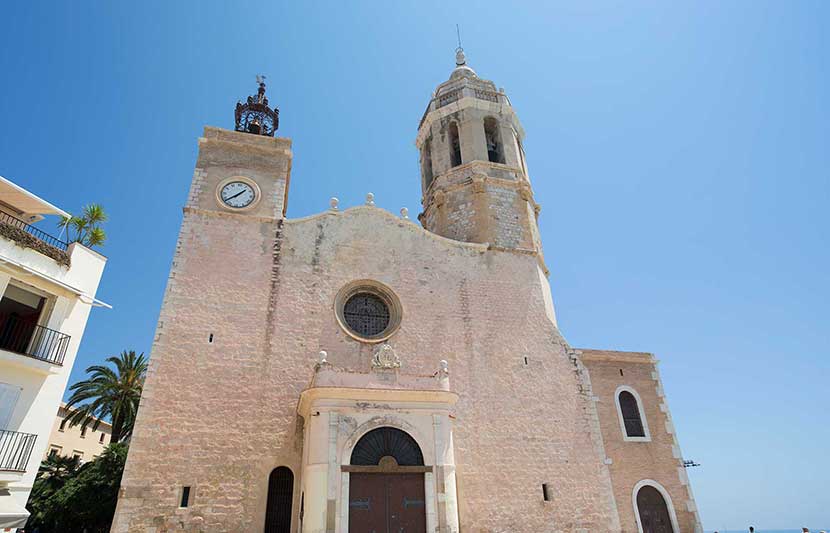 The San Sebastian church in the beach town Sitges, 30 minutes from Barcelona

→ Read more about our Day Tour to Tarragona and Sitges

Girona is probably the most famous city of Catalonia after Barcelona, justifying its fame to its privileged location 99km from Barcelona and right in the middle of subtropical mountains and the famous Costa Brava. It is the second biggest city of Catalonia and it has a very diverse and enigmatic character thanks to its large history. In simple words, guests wandering around its picturesque cobblestone streets can admire several monuments and buildings whose varied architecture reflects the influence that Romans, Visigoths, Arabs and Jewish left to the city with the passage of time.

Nowadays the Catalan Gothic Cathedral of Girona, the Roman walls and fortification of the city, Sant Feliu church, the Arab baths, the Jewish heritage and more, are live-testimonies to the immense history of this city. Girona’s reputation has grown through the last years in an international level with the selection of the city as one of the main film settings for the famous series ‘’Game of Thrones’’. 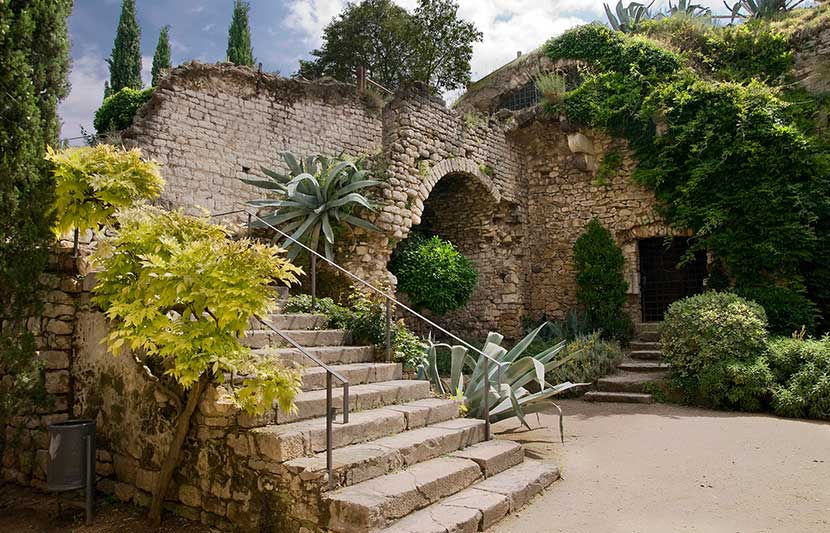 The historic part of the city of Girona

→ Read more about our Costa Brava and Girona Tour

Tarragona is a very interesting port city, located south of Barcelona on the Costa Daurada. lt is one of the largest and oldest cities of Catalonia as it was founded before the 5th century. It is said to be founded by Phoenicians and its numerous references in Ancient Greek, Roman writings testify its great historical presence. The city´s main expansion and flourish took place during the Roman Empire, with the city being fortified as a Roman colony of a very big importance.

The Roman ruins that remain nowadays have been declared as World heritage sites by UNESCO. Visiting the city you will be surprised to see the immaculate Roman Amphitheatre but also the Roman walls, the roman Circus , the capitol, the necropolis as well as 4km out of the city an impressive Roman aqueduct.  Of course the majestic Gothic- style Cathedral of Tarragona is absolutely within the later monuments of the city which has also very promising local cuisine and fresh sea-food. 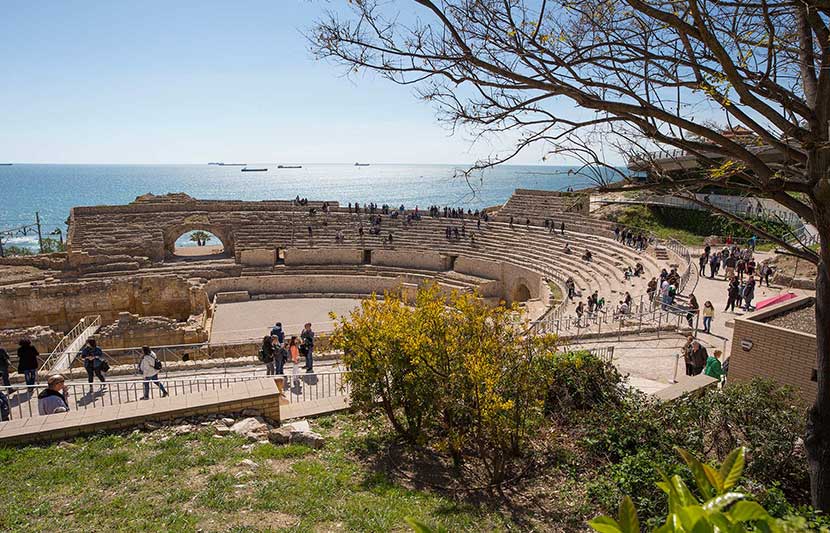 The roman theater in Tarragona

→ Read more about our Day Tour to Tarragona and Sitges

Salvador Dali’s as well as fans of surrealist art, are absolutely thrilled to have this life time opportunity to see the masterpieces and work of the famous painter, while travelling around northern Catalonia where he was born and spent most of his life. Having Figueres as the most important place and at the same time his birth place, visitors can admire the famous ‘’Dalí Theatre and Museum’’. Dali himself spent over a decade planning and creating this museum to host his artwork with the main idea of creating "a surrealist object", "a theatrical museum" as he called it.

Apart from the largest collection of the major works of Dalí, there is a crypt below the stage in which Dali is buried. You can continue with Dalí's Legacy at the Dali’s House-Museum at Portlligat in Cadaques, a beautiful fishing village northern of Figueres in which Salí spent many years working and living until he went to the ‘’Gala-Dalí Castle’’ at Púbol (also visitable) . a tower he gave to his wife Gala. All three museums are open to the public and receive many visitors every year. 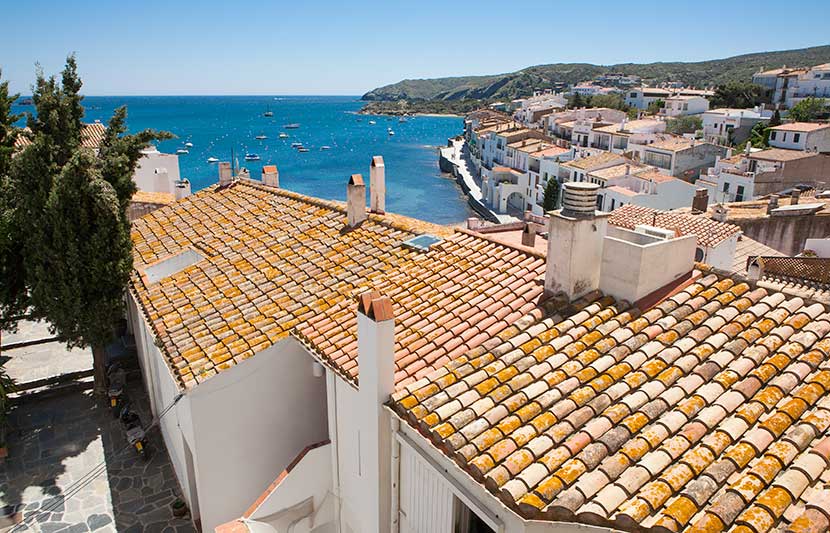 Ripoll and Besalú are two small towns north of Barcelona very much worth visiting. They are located close to each other, within a very natural landscape between the Sub-Pyrenees and the Pre-Pyrenees next to a volcanic zone natural park. Both villages were founded during the Middle Ages, when they played a significant role.

The artistic medieval character and the history of Besalú , has made the city appear on several lists of historical importance. The most important monuments of the area are the monasteries from the 12th century from the romanesque period, as well as Besalú's Jewish bathhouse and impressive Romanesque bridge over the Fluvià River.

In Ripoll you will find a beautiful Benedictine monastery, the Santa Maria de Ripoll, built in Romanesque style and founded by the Count Wilfred the Hairy, but also other churches from the 12th century and an Ethnographic museum. Santa Maria de Ripoll monastery became the family mausoleum for the Counts of Barcelona and Counts of Besalú but also a great spiritual place with the creation of a large library. 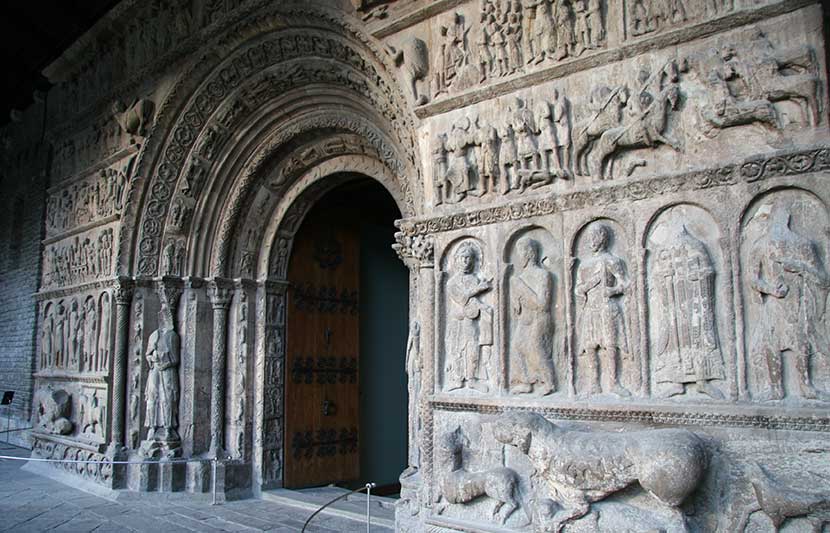 The romanesque church of Santa Maria Church in Ripoll

→ Read more about our Tour to Romanesque art

The monastery of Santa Maria de Poblet is the largest one is Spain and it is located at the foot of Prades Mountains. Following historical resources the monastery was founded by Cistercian Monks originating from France, whereas that area had been conquered by the Moors. It has a great religious and political significance as it was one of the two royal pantheons of the kings of the Crown of Aragon which in their majority have been buried there, and also it has been listed within UNESCO’s world heritages sites of culture. This monastery is part of the famous ‘’ Cistercian triangle’’ that refers to two additional monasteries built at that time, like the Santes Creus monastery located 30 mins drive away.

Santes Creus monastery was built in 1174 when the village was donated to the monks of Valdaura. The monastery was built under the Cistercian principles and its architecture bares Romanesque, Gothic and Baroque influences. It has been the burial place for two Aragonese kings and one queen, while the architectural significance of the tombs, the cloister, its 12th century laundry and rose window, along with its history, declared the monastery as a national monument in 1921. 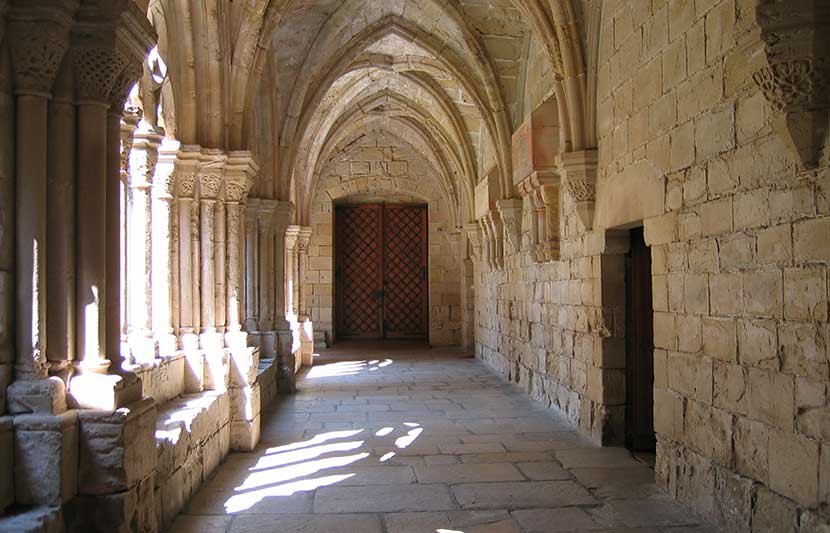 Calella de Palafrugell is an ancient fishing village but also holiday resort right on the Costa Brava that shouldn´t miss from the list of people visiting around Catalonia. We are definitely suggesting this village as it still keeps the charm and authenticity that characterised it, even before the mass tourism that arrived at the village.

In other words visitors will find themselves across traditional two-floor fishermen’s dwellings, narrow streets and a calm, beautiful, time travelling scenery. The village is surrounded also with wonderful beaches of blue flag standards with crystal clear waters. This is definitely the place to be for sun and sea lovers especially during the summer months. 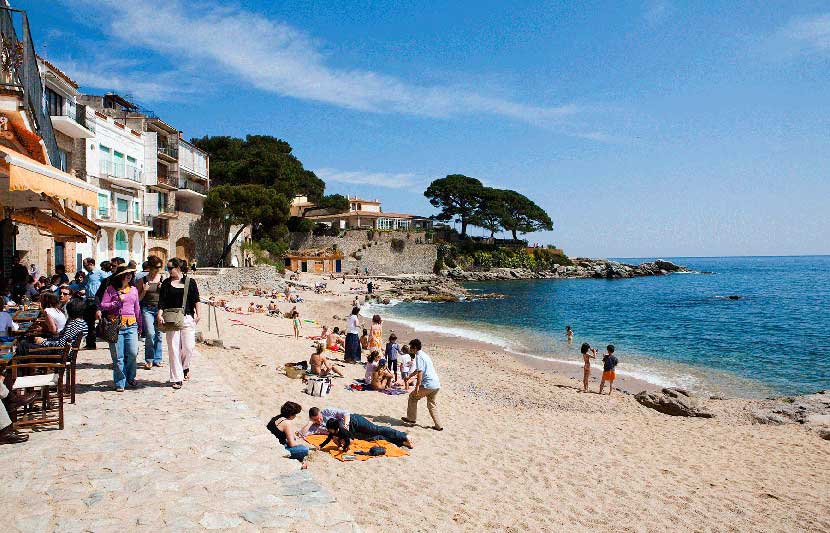 Sant Sadurni d´Anoia is commonly said to be the birthplace of one of the best sparkling white wines known in Spain and internationally as ´´Cava´´. Cava´s DO status origins from Catalonia and is produced mainly from the following local grape varieties: Macabeu, Parellada and Xarel·lo.  With the village being part of Penedès region , also world-known for its excellent wine-making, Sant Sadurni d’Anoia is the home to more than 80 wineries specialising in the production of  cava.

Even though the quality level is pretty high in most wineries, the most famous and pioneer names in Cava production are Freixent and Codorníu wineries. A visit in any of these would be definitely a life experience whereas at Codorníu wineries, guests can admire the architecture of the cellars designed by the architect Puig I Cadafalch – one of Gaudi’s students. 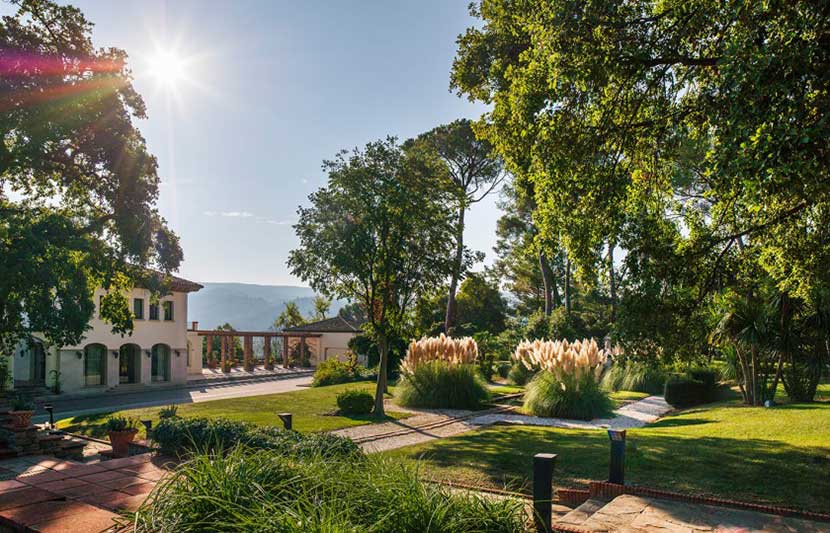 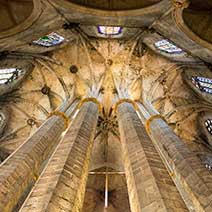 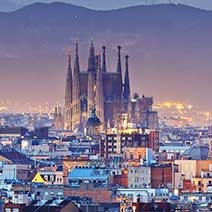 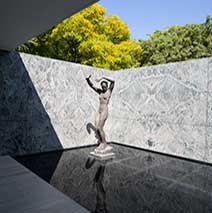